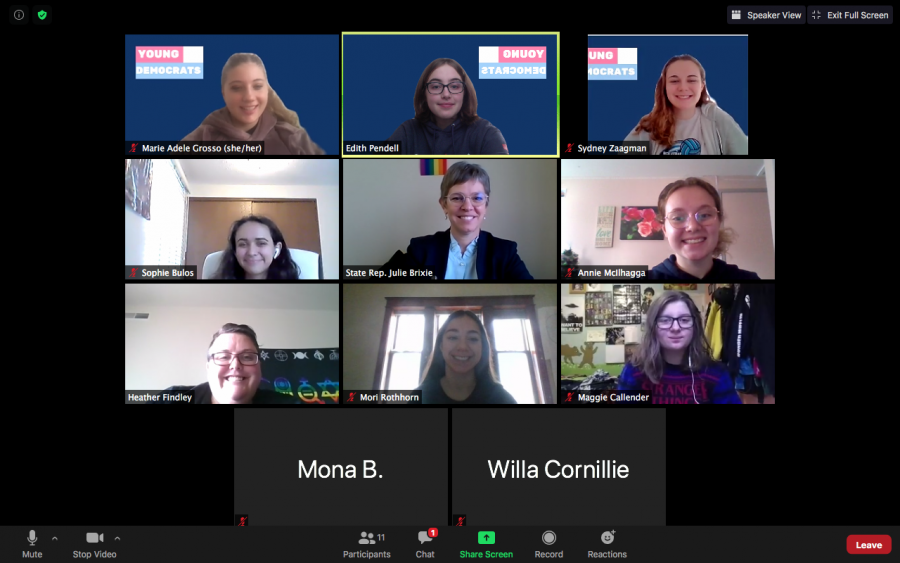 State Representative Julie Brixie met with the Young Democrats Club on Friday, Dec. 11. Students had the chance to ask questions and listen to Brixie’s perspective not only on national issues, but take a deeper dive into Brixie’s experiences with local issues.

Club co-president Edith Pendell (10) reached out to Brixie via email to schedule a zoom call with her club members, saying that she believes it is important to be involved and aware of all levels of the political process rather than paying attention solely to highly publicised politicians like the president.

“Julie Brixie does a lot of good work in Michigan, and I don’t think that people really understand how the state legislature affects our life and laws here in Michigan,” Pendell said. “In addition, I think being a state representative is totally something I could see myself or other club members doing in the future, so I want my clubmates to have exposure to that.”

Many club members looked forward to the opportunity to speak with Representative Brixie and ask her questions, which gave them a chance to learn more about the experience of government work, creating and passing bills and being part of congress. One of those students was Sophie Bulos (11).

“Prior to meeting her, the club was very nervous, especially when she was in the waiting room for the Zoom meet,” Bulos said. “When she came on and we got to know her a little, it was very relaxing, and she is very in tune with our generation so it was cool to relate to her.”

Students also brainstormed questions before the Friday zoom. One question posed was from Magdalene Callender (9), asking Brixie when she wanted to get into politics. Brixie explained that she got into politics when buildings including a doctor’s office in her neighborhood were torn down by the township, which was met by anger and was not wanted  by people in her neighborhood. Brixie started attending meetings for the Planning Commision and zoning board to vouch for the voices of her neighbors and herself.

“And we really fought that in the neighborhood, and the township didn’t protect us, and they tore the building down without a permit,” Brixie said.“One thing led to another and I’m, I’m a sucker for the underdog. And so I fought for my neighborhood.”

Another thing brought up to Brixie by club members was her history with laws and work regarding LGBTQ+ rights. Brixie responded saying she had been working on legislation and plans to continue working on legislation to protect members of the community, as well as her excitement at the success of the Elliott Larsen CIvil Rights Act, which would protect the rights of members of the LGBTQ+ community.

“This comes from, you know, a place of my beliefs, but also a very personal place where two of my kids are members of this community, and it literally breaks my heart that they can be fired from their jobs for who they love” Brixie said.

Some club members, like co president Marie Adele Grosso (11), could also see themselves working in government in the future like Brixie, Grosso saying it would be a dream of hers.

“There’s tons of jobs here,” Brixie said. “You guys  should think about and explore the many many many different government jobs that are available. There are good jobs, and we need competent people helping provide the services that the government provides So, looking into government work. As you think about your futures and look for your careers it’s incredibly stable work, and it’s incredibly fulfilling work. Help provide people with different services, whether it’s health services, whether it’s dental services, there’s a huge variety of jobs available.”

Not all members of the Young Democrats Club, including Grosso, technically identify as part of the democratic party, but participate in the club because of their belief of the importance of politics and social issues, and to be young people participating in matters of government; whether that be by voting, working in government, or running for office.

“I think it was just important that she came and was really encouraging about it for people to get into office. It’s really important for a diverse community of people that are willing to run,” Grosso said.  “I do also believe that we need progressive performance within the Democratic party so there’s always more work to be done and improvements to be made.