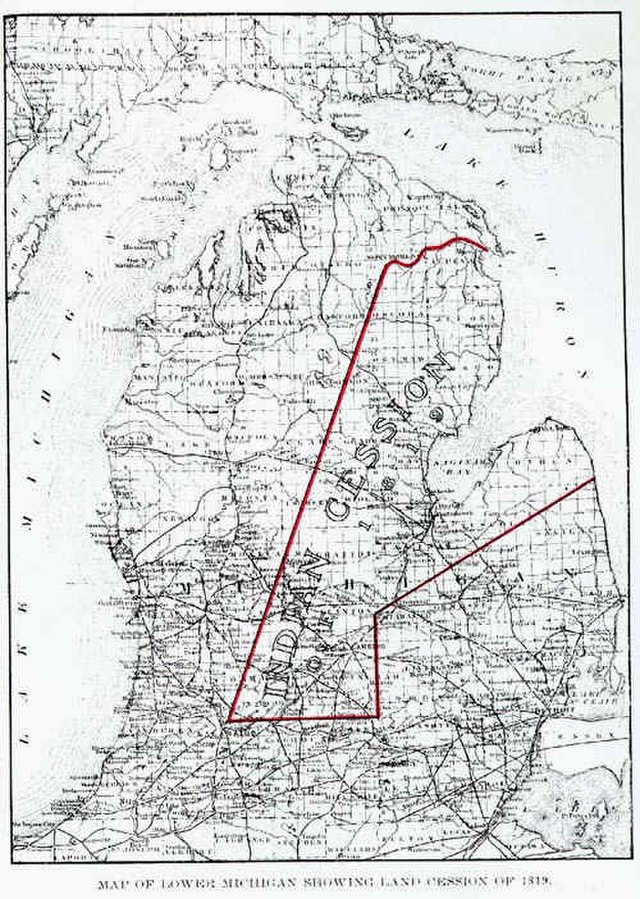 Map of the 1819 Treaty of Saginaw cession. We live on land traditionally owned by the Anishinabeg. (Photo by Public Domain)

Map of the 1819 Treaty of Saginaw cession. We live on land traditionally owned by the Anishinabeg.

Indigenous Michigan History and Why Land Acknowledgements are Important

East Lansing High School occupies the ancestral, traditional, and contemporary Lands of the Anishinaabeg-Three Fires Confederacy of Ojibwe, Odawa, and Potawatomi peoples. The high school resides on land ceded in the 1819 Treaty of Saginaw.

What you just read is a land acknowledgement. It is a short text recognizing the native people that were the original stewards of the land you stand on, according to the National Museum of the American Indian. Attached to documents or websites and read before events, it is intended to provide recognition to indigenous people in the United States and open conversations about the complex and destructive legacy of colonialism.

The land acknowledgement above was brought to ELHS by former science teacher John Plough. It is based on one created for Michigan State University. It might seem daunting due to unfamiliar pronunciations, but pronunciation guides like the one on the Ojibwe People’s Dictionary, as well as online formats, make acknowledging is easier than ever.

The tough questions are: “Are Indigenous people represented correctly in the media?”, “Are my perceptions of Indigenous people affected by harmful stereotypes?”, “How can I support legislation that protects indigenous land and resources?” and “Is my school system teaching me indigenous history accurately and effectively”.We can work to answer them, but first we need to start with what is owed by basic respect: proving acknowledgement for the history of the land we stand on.

Anishinaabeg (usually pronounced Ah-neh-shin-ah-beg) is a general term for a cultural and linguistic group of loosely affiliated indigenous groups in the great lakes area of Michigan and Canada.  The language is generally known as Anishinaabemowin, and in it, Anishinaabe means a “human person,” according to the Ojibwe People’s Dictionary. The Three Fires Confederacy is an alliance that dates back to the eighth century, long before Europeans set foot in the Americas.

Modern-day Michigan was explored by the French in the 1600s, and claimed by French traders and settlers between 1668 to 1763.  During this time, governments and individuals exploited alliances and stole people from their homes in a large practice of indigenous slavery. A study by Brown University’s Linford D. Fisher estimates that between two and five million indigenous people were enslaved in the Americas during this period.

Modern-day Michigan came under British control in the Seven Years War, and then became part of the United States. Members of the Anishinabeg-Three-Fires Confederacy ceded land to the United States with the 1819 Treaty of Saginaw in an area in the lower peninsula centered on Saginaw Bay. The treaty area includes all of East Lansing.

Starting in the mid-1800s, many Native American children were taken off reservations and forced into residential or boarding schools.  Curriculum attempted to strip them of their culture and language, even banning traditional clothing and hairstyles. This was part of government-funded “Americanization,” also known as cultural assimilation. Abuse of all sorts was rampant in these facilities, but isn’t the end of the story. Native American history doesn’t end residential schools- it is alive right now.

Those of us who live here as settlers may not see ourselves as pioneers, chasing manifest destiny by driving natives off, but we have inherited, continue to occupy, and benefit from a colonized Michigan. The descendants of those pushed off their lands share the halls with us every day. You may not be involved in forceful assimilation, but the effects of “Americanization” on the way we view and react to Native American culture still exist. Only one state has a law that requires the teaching of Native American history, culture, and heritage—it isn’t Michigan.

In a state with a 3% native population of nearly 100,000, 12 federally recognized tribes, as well as countless others, it is vital to stop the erasure. While it may be comfortable for non-native Michiganders to pretend atrocities toward natives are a thing of the past, they might not know that Michigan’s residential school, Mount Pleasant Indian Industrial Boarding School, was still in operation until 1934. The school is now property of the Saginaw Chippewa Tribal Nation, an Ojibwe tribe.

Begin doing your part by adding the acknowledgement as a signature on your email. This step is easy: students, teachers and staff alike should add the text. The next step is the hard part: do your own research, such as at the Ziibiwing Center, a center of Anishinabe artifacts, history and culture in Mount Pleasant, MI. The, amplify indigenous voices.

Together, we can start the process of reconciliation and “decolonizing” our thought processes by reflecting, re-examining, talking, learning, and acknowledging. 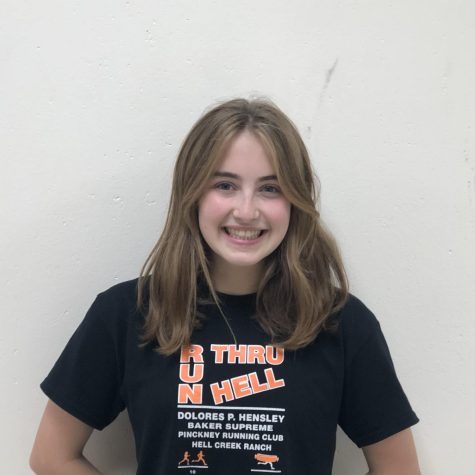