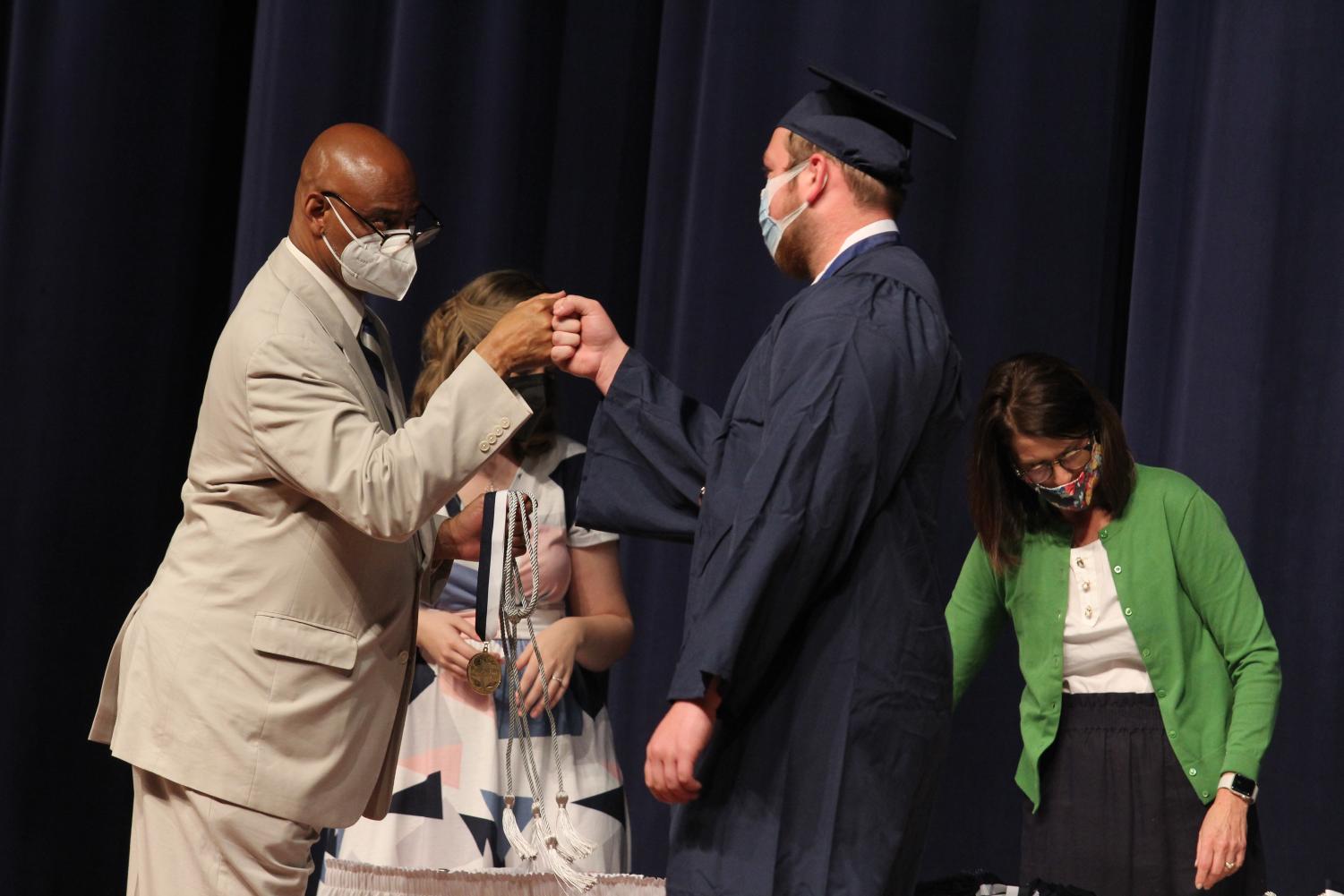 Mr. Wells retires after 40 years of work in the district

One of the last speeches of Andrew Wells’ career was not in front of the East Lansing family he’s been used to for the last four decades. Instead of looking out at the familiar faces of students and teachers, he looked out to see community members, many of which he hadn’t seen or spoken to in years.

It was only then that he realized the impact his work in the district had had; throughout the evening, he watched parents, students both old and new, and countless others line up to tell their ‘Mr. Wells story.’

“It’s nice to know that when you give your heart and soul to kids to be a part of their life, it’s just nice to know you’ve had an impact,” Wells said. “Quite honestly, I had no idea that people feel the way they feel. It’s refreshing. It’s humbling and it lets me know that the calling that I’ve been given is truly a calling and something that I’ll never forget and I’ll always cherish.”

And after nearly 40 years of working in the East Lansing school district, Wells has decided it’s time to retire.

His work in East Lansing started as a cafeteria helper to students at Hannah Middle School in 1981. But his role in the ELPS community began much earlier, when he was a student at East Lansing High School.

When he attended ELHS in the mid-to-late 70s as a 1976 graduate, Wells was part of a nearly 1,500 person student body. But he remembers he was one of the only students of color to attend the school, as compared to the current demographic with 43.3% of students being POC.

“The demographics [now] are just completely different,” Wells said. “What I remember most about high school first is the camaraderie, the friendships that I garnered along the way. I participated in extracurricular activities, not only athletics, but I was one of the first African Americans to participate in a school play in a musical ‘Oklahoma.’”

After graduating, Wells went to MSU as well as Eastern Michigan University, where he played college basketball and ran track and field. He went with hopes of a career in professional basketball, but over time he saw his expectations change; he turned towards education.

“I was looking for something to fulfill not only my charge with giving back to my community, but also being able to support kids because I had coaching in my background too,” Wells said.

“There was something that just kept pulling me back to this history and quite frankly it was the kids,” Wells said. “And so my love for working with kids and being a part of something special, it was East Lansing Public schools, it was being here.”

After being a lunch room monitor at Hannah Middle School, Wells became a community liaison in 1983-84. A few years later, Wells began working at ELHS as associate principal, where his presence was already established and known by many students who had him as a coach.

For alumnus Jevelyn Bonner-Reed, who was on a basketball team he coached, he served as a role model in these situations. She recalls a game from her early days of high school basketball during a game in a city infamous for being unfriendly towards POC, and she was the only person on the team that wasn’t white, so only she and Wells had to stand out during the game.

“I remember feeling like we were playing both the team on the floor and the referees,” Bonner-Reed said. “I was getting frustrated and feeling that the treatment from the referees was unfair, yet Mr. Wells was above it and got me to focus on what I could control… I have had to pull on that experience many times in my life so I am grateful for him showing me an example of how to do it gracefully.”

Though Wells never taught in a classroom during his career, coaching was not the only place in which he taught students lifelong lessons. Countless alumni credit their current success to what they learned from Wells decades ago.

But more than success, alumnus Ashley Abrams remembers Wells teaching him that standing his ground and fighting for what he believed in was just as important. Abrams and a group of students decided to organize a sit-in because the school did not take Martin Luther King Jr. Day off.

“So we did a sit-in, and he was really supportive of it, which we did at first, we didn’t think so because… obviously he was a staff member,” Abrams said. “We thought he’d be like, ‘you guys gotta go to class’, but we told him that we want to make this a productive day. We want to sit and talk.”

In Abrams’ few years of high school following the sit-in, he got to know Wells working in his office as his student aid. He got daily advice and insight from Wells, which he credits to the reason that he went into education. Now working as a school social worker at Okemos High School, he still calls on Wells for advice, but now Wells calls on him, too.

“We probably talk [at least] once a month,” Abrams said. “You know, it’s cool that the conversations are a little different. Like it’s sort of just like professional, throwing things at each other and figuring things out and seeing what districts are doing and stuff like that. And it’s kind of cool because he’s still Mr. Wells, I can’t call him Andy, he’s Mr.Wells…And so it’s really cool that now he has that level of respect for me.”

After leaving the high school in 2006 to be elementary principal, Wells was faced with a major challenge–he volunteered to serve as principal at both Glencairn and Whitehills at the same time after budget cuts left the district unable to staff both separately.

“[I did it] because I was a lot younger. And I just love what I do. And so, I did it. And it was hard. It was really hard, but I did it for two years, and it was one of the most challenging things that I’ve done,” Wells said. “But on the other hand, it was one of the most rewarding things because we got a chance to be a part of two different school communities and lead.”

But after over a decade of being at the elementary schools, Wells made a return to the high school in 2017, this time as principal. Algebra teacher Maggie Moore recalls the school’s need for a unifying force, and how fitting Wells was to play this role.

“Mr. Wells became the principal at a time when our faculty and staff needed a strong light,” Moore said. “They needed a connector of people in order to guide us, we had been through several principals before Mr. Wells and at that time the staff felt very fragmented and separate. So Mr. Wells was the perfect candidate at the time. To come in and build that sense of unity between the faculty and staff.”

For the past five years he has spent as principal at the high school, Wells has left his mark by standing at the door every single day, fistbumping students. A few seconds of every morning has left a lasting impression on many.

“It was my way of connecting with students and actually not only connecting with you guys, but it kind of gives you that extra energy in the morning,” Wells said. “And it just made us feel like we’re a part of a community, that we’re all a part of something, something special.”

But students remember him for more than just fistbumps. Sommer Aljaari (11) has gotten to know Wells over the years since he was her principal at Whitehills Elementary School.

“Now that I’m here we like kind of reconnected and now we’re just kind of like besties,” Aljaari said. “Whenever he comes up to the table, I’m always the first one to greet him…we kind of just get to chatting about just school about how our day is and then he tries to guess every person’s name at the lunch table and he gets mine right first, before everyone else’s.”

Over the past month, Wells has been shocked by the support and appreciation that he’s seen from the community not knowing the impact he had on everyone in the ELHS community.

But he knows it’s time for the next chapter of his life. He hopes to take some time to be with his family and focus on his mental health. But it’s not the end of his road in education–he still plans to be a mentor to those working in education.

“East Lansing Public Schools as a whole is better off for all of the years,” Moore said. “I would also probably say that I just want him to feel like he deserves to just be free and just have fun and come back for all the events, but not have to discipline, and go for it and enjoy it because your work here is done. He has made an impact. You put your stamp on East Lansing Public Schools and we appreciate that. And we’ll always have a part of that.” 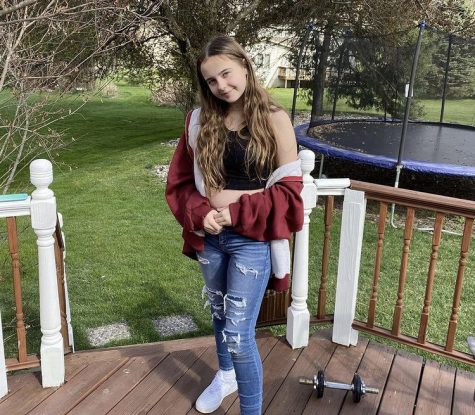 Jade Westjohn is a member of the Class of 2024 and one of the staff writers and copy editor for Portrait. This is her second year on staff as a junior.... 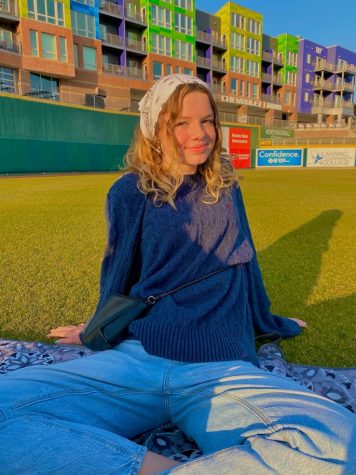 Willa Cornillie is a member of the Class of 2023 and is one of the Co Editors-in-Chief for Portrait. She has been on staff since her freshman year during... 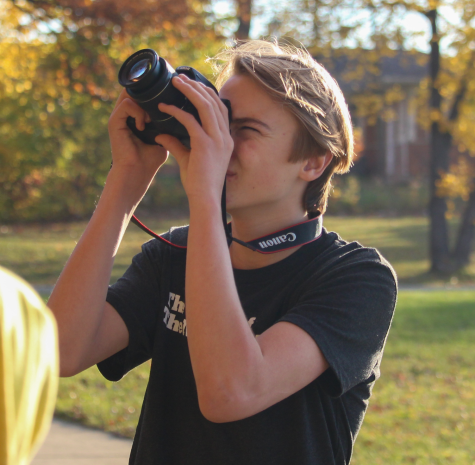 Quinn Martin is a member of the Class of 2024 and is the Photo Editor of Portrait. He has been on staff since his sophomore year during the 2021-22 school...