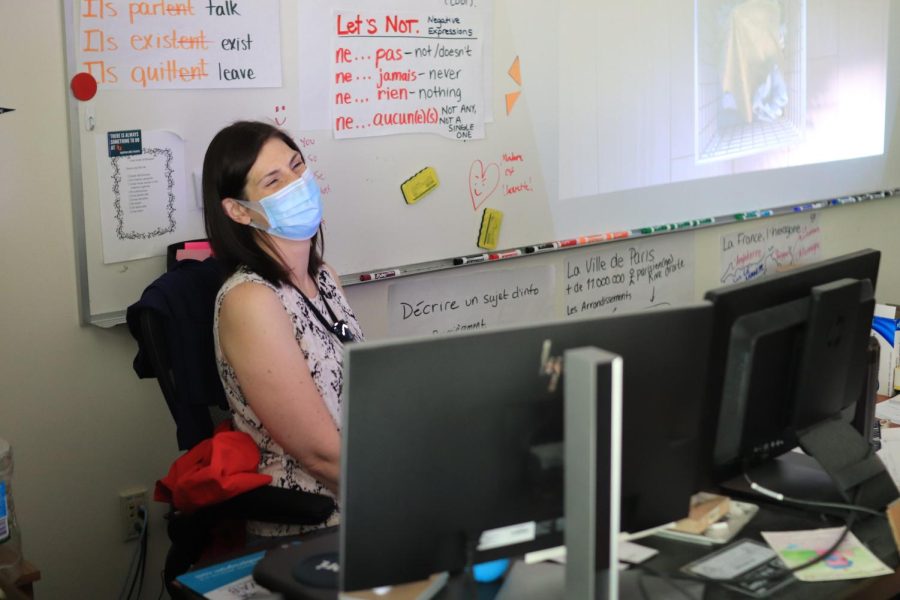 Laughing with her class on May 19, French teacher Marcy Sheldon shows a movie to her combined AP French and Careers in French class. As the department chair of World Languages, Sheldon has overseen major changes to how language is taught.

After finalizing her teaching degree, French teacher Marcy Sheldon traveled from places all over Michigan, and then to New Hampshire, for a teaching job. But after a while, Sheldon yearned to go back to Michigan. So when she got her job at ELHS in 2013, she thought she would retire there.

In her years at the high school, she has helped make massive changes to how world languages are taught, impacted hundreds of students and has made many good friends. But now, nine years later, Sheldon is leaving for Virginia to be with her partner.

As a French teacher, she has played a large role in revisions to how foreign languages are taught, along with other teachers. Working with former French teacher Kim Floyd and current French and Spanish teacher Rachel Gehres, the three tried a new way of teaching foreign languages—one that drove away from vocabulary quizzes, textbooks and memorization, and leaned more towards interactions, stories and support.

And the new method proved to be effective—in the 2022-2023 school year, there will be two sections of AP French, more than any other point in Sheldon’s time at ELHS. According to Sheldon, the World Languages program is large, with the largest-ever upper levels the school has seen. But if she could go back, Sheldon said she wished she had thrown away the textbooks earlier, combined levels III and IV and changed the way she taught overall earlier.

“Teaching through connection with the students and storytelling and play and creativity is life changing. Leaving worksheets and quizzes and tests behind has been just the best experience of my career.”

The initial transition towards a more interactive learning environment wasn’t easy for teachers either. Sheldon commended the bravery of her colleagues in trying something new, a way that they were not necessarily told to teach with. Teaching in a new way required introspection.

“Nobody likes to think about all the things that they do wrong. It takes a lot of courage to face the things you’re doing that you may be really good at, but don’t benefit your students,” Sheldon said. “And that’s what all of us in this department have done over the years and it’s worth it. All of it’s worth it for the kids, all of it.”

While Sheldon understands that many French students are dismayed to hear of her departure, she wants to make sure the reason they are taking French isn’t because of her.

“I don’t want kids to drop French because I’m not the teacher next year. I didn’t design a program around my personality. I designed a program around my students,” Sheldon said. “I really hope that I’ve instilled in my students a love of the language and a sense of community with each other. And then that transcends whether or not I’m at the front of the room.”

I don’t want kids to drop French because I’m not the teacher next year. I didn’t design a program around my personality. I designed a program around my students. I really hope that I’ve instilled in my students a love of the language and a sense of community with each other. And that transcends whether or not I’m at the front of the room.”

Sheldon hopes that whoever succeeds her in her position will be completely on board with how foreign languages are taught at ELPS.

Once in Virginia, Sheldon wants to maintain her teaching certification, which expires between three to five years after the last renewal. This involves attending a certain amount of professional development. However, she doesn’t intend to only search for teaching jobs, since teaching can require large amounts of energy.

“For medical reasons I’m having less energy than I used to. So if I’m not finding a teaching job, that is, like, I’d love to teach levels I and II, but even that is usually middle school. Middle schoolers require and deserve a lot of energy,” Sheldon said. “So, you know, it depends on what opportunities are available.”

Other opportunities exist in Charlottesville, which is the home of the University of Virginia. With her skills, Sheldon can look at a wide range of jobs—from office work to university work.

“I’m not sure what’s next for me and I’m open. I’m open to whatever is next,” Sheldon said.

Moving forward, Sheldon knows that she would like to keep writing French readers, which are books for people learning French. Having written one French reader and having translated Spanish units into French, Sheldon is already working on another beginning French book.

The decision to follow her partner was not an easy one for Sheldon. She has made numerous connections both inside and outside of school, from students, their families and staff. But choosing to stay would mean she would have to end her relationship.

Being able to make hard decisions that benefit someone while not necessarily benefiting others is something Sheldon wants students to take away from her departure.

“Even though I may seem like I have a never ending supply of positivity or energy, I don’t. Making a move like this is about having balance in my life. And I want my students to have balance in their lives. I want them to feel like they can make decisions that are best for them, even though it may not be best for everybody else,” Sheldon said. “Because at the end of the day you only have yourself and if you don’t take care of yourself, you can’t take care of anybody else. I want them to know it’s okay to make hard choices if it’s best for you.”

Just as Sheldon’s relationships with students, staff and families are important, she believes that connections between students are just as important, if not more.

“That’s what you remember. That’s what sustains us when we are in trouble and when we need help and when we need support and also when we want to celebrate what’s going on,” Sheldon said. “If we don’t have those relationships if we don’t have those trusted adults or those friends in school or just social groups of people who know us, we’re missing out.”

A number of students see Sheldon as their trusted adult at school too, and many were shocked to hear that she would be leaving.

“I know I’m the trusted adult for quite a few kids in this building. It’s hard to leave them and I don’t take that honor lightly,” Sheldon said. “Hopefully they remember that I made them feel good about themselves. And I want them to know that caring about my students is the most important part of my job.”