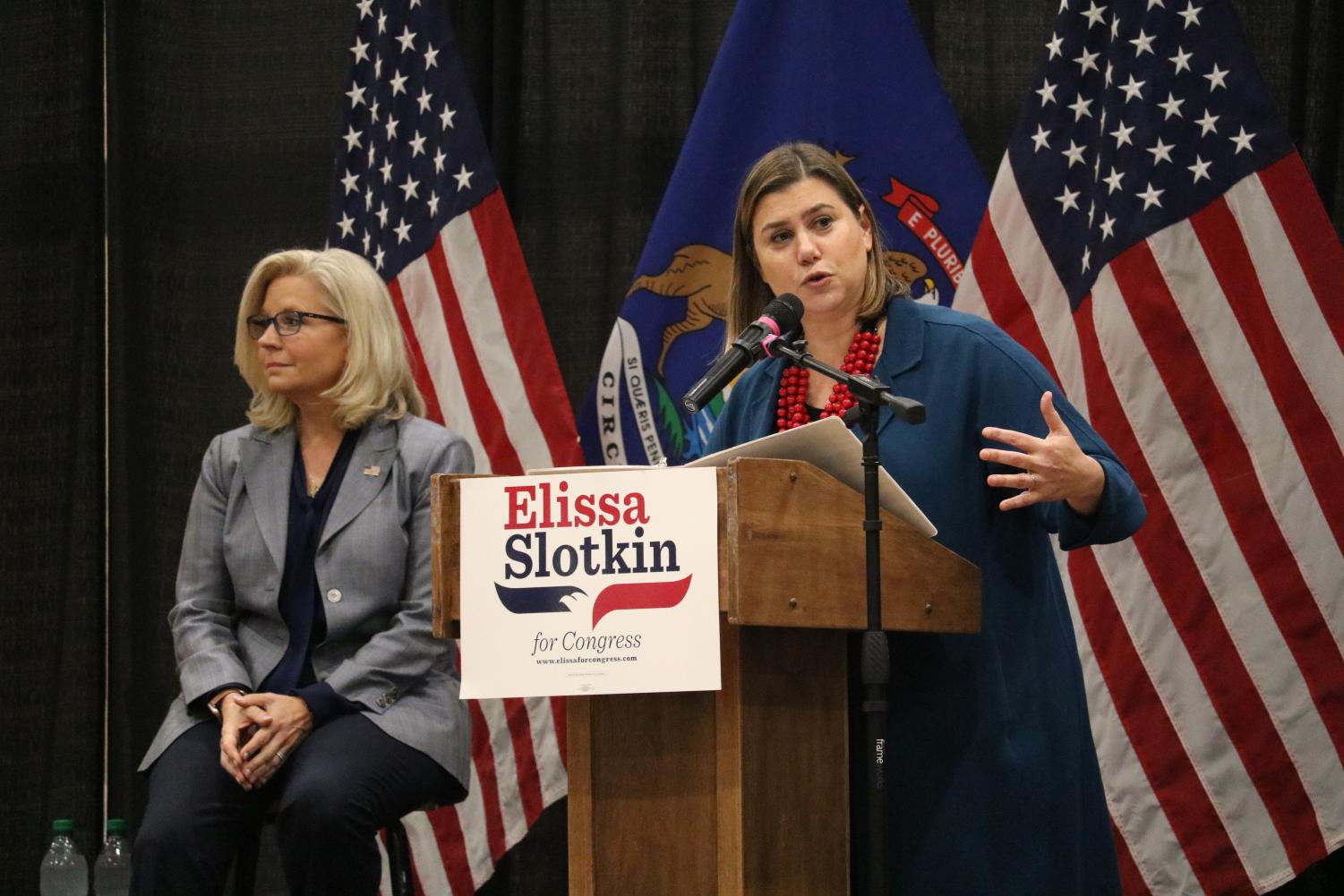 U.S. Representative Elissa Slotkin speaks to a crowd of community members at a political event held in the high school gym alongside U.S. representative Liz Cheney. At the event, Slotkin primarily spoke about political polarization, extremism on both sides of the aisle and her relationship with Cheney. (Photo by Tianna Tran)

U.S. Representative Elissa Slotkin speaks to a crowd of community members at a political event held in the high school gym alongside U.S. representative Liz Cheney. At the event, Slotkin primarily spoke about political polarization, extremism on both sides of the aisle and her relationship with Cheney.

Elissa Slotkin and Liz Cheney’s Joint Rally at ELHS: A Look Inside

In late October, whispers began spreading amongst ELHS teachers that an important figure would be coming to ELHS to campaign for Elissa Slotkin, the Democrat U.S representative for Michigan’s 7th congressional district, where ELHS is located. Slotkin had rented out the gym, but the mystery guest was up for speculation. A few weeks later, an email was sent confirming the event, a Democratic rally with an unexpected guest: Liz Cheney, the lone U.S. representative from Wyoming, ranking house member and one of few vocal Republican critics of former president Donald Trump.

Students rushed to sign up for the event. With only 30 tickets available, students would get tickets on a first-come, first-serve basis, and should the number signed up pass 30, students would be randomly selected. Luckily for those who signed up, only around 30 students ended up registering. One of the students who attended the event was James Knake (12).

“Partially, it was just for government in action hours for AP Government,” Knake said. “But it’s also going to be kind of interesting. Like it’s rare to see someone like Liz Cheney endorse a Michigan House rep.”

While it was an interesting event for Knake, he wasn’t sure how effective it was. While many political commentators voiced their opinion that the event might hurt Slotkin’s chances, Knake just didn’t see how it could affect the outcome of an election much either way. For him, the endorsement was mostly symbolic

Slotkin received an endorsement from Cheney a few days prior as part of a written statement created by and published by the Slotkin campaign.

“While Elissa and I have our policy disagreements, at a time when our nation is facing threats at home and abroad, we need serious, responsible, substantive members like Elissa in Congress,” Cheney said in the statement.

About a week after the email was sent out, nearly 600 attendees, including students, donors, and district administration, crowded into the ELHS gym.

In response to a question posed by Portrait at a press conference following the event, Slotkin recognized the relevance of hosting the event at a high school, in a university town that proves to be one of the core support groups of her campaign.

“If Michigan State students don’t come out on election day, I might not win. And the same thing for people who are just now turning 18,” Slotkin said. “[Young people voting] is important because it represents their collective power as young people to affect elections and demand things that they care about from those in power.”

The underlying theme for much of the rest of the rally proved to be one of bipartisanship and parties coming together to get laws passed and to change policy. Slotkin, who runs as a moderate Democrat who is willing to make bipartisan efforts, took the stage after a few opening speakers, along with Cheney. Both representatives approached the stage at the same time, and were greeted by a standing ovation.

Slotkin spoke at the podium first, and made a few opening remarks. After speaking about her experiences working with Republicans, Slotkin began speaking on the importance of keeping two parties in power, without letting one become too powerful. An important part of any healthy democracy involves one party pushing, and another pulling back, according to Slotkin.

“Disagreement and debate are the hallmarks of American politics,” Slotkin said. 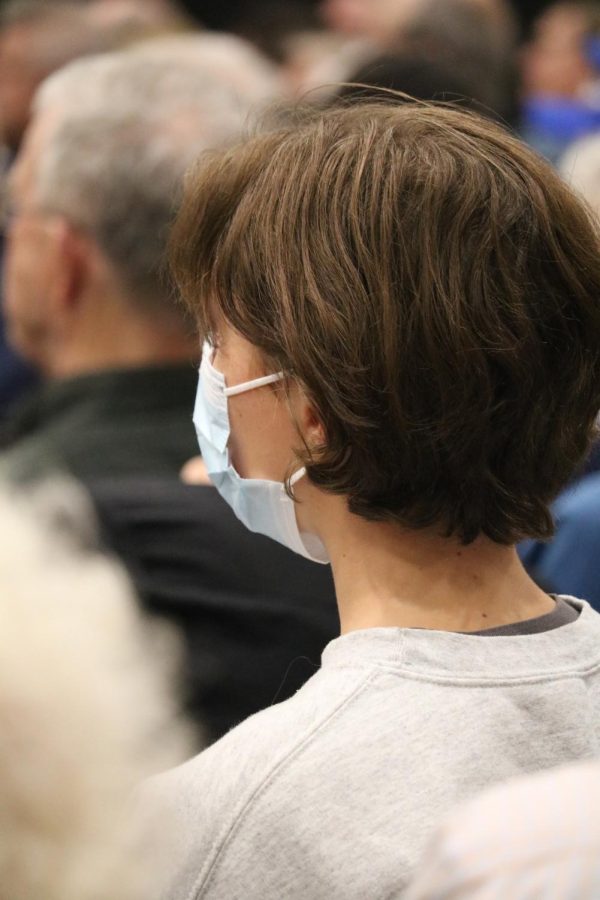 Before turning over the stage to Cheney, Slotkin spoke about her experience on Jan. 6, when rioters stormed the U.S. Capitol building during the election certification process. Revealing that both representatives ended up by chance in the same room as rioters flooded the halls, she told the story of how she noticed Cheney making efforts to address the situation when no other Republicans were. Slotkin and the other congresspeople were given food from a vending machine, and the congresswoman was able to grab a bag of microwave popcorn. Upon seeing Cheney making calls to try to handle the situation, Slotkin approached Cheney.

“I gave her my most prized possession [at the time],” Slotkin said. “My microwave sleeve of popcorn.” 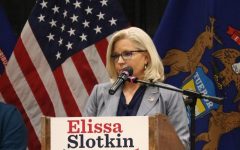 I think Gerald Ford would be supporting Elissa Slotkin”

While Cheney later admitted this was not the start of their friendship, she said it was the the moment “that sealed it.”

Before introducing Cheney, Slotkin praised her colleague for her actions on and following Jan. 6, and reflected on increasingly violent political rhetoric within her own district. One case that Slotkin pointed out involved a supporter of hers in Shiawassee county, a relatively rural county with a population of just under 70,000. This supporter approached Slotkin at an event, and expressed that it was often hard for her to be “open minded” when surrounded by an overwhelmingly Republican-voting populace. For Slotkin, these fears represented a larger trend.

“We have stopped seeing each other as human beings,” Slotkin said. “People are likely to choose decency and tolerance if they see their elected leaders doing the same.”

After holding for applause, Cheney moved up to the podium being greeted by cheers and applause from the audience. Following some opening statements, Cheney began praising Slotkin as a colleague, person, and representative.

“This is the first time I’ve ever campaigned for a Democrat,” Cheney said. “And I have to say, it wasn’t a hard decision at all… we have to elect good people.”

This wasn’t Cheney’s first time campaigning in Michigan, though. Cheney shared that she helped with former president Gerald Ford’s campaign in Michigan as a 10-year-old, humorously explaining that she was given the task of closing promotional envelopes with wet sponges, a job that was quickly taken away once the envelopes became entirely soaked.

As the end of the rally approached, Cheney recounted the experiences that she shared with Slotkin on Jan. 6, along with some of her own. Cheney, unlike Slotkin, described walking the halls of the Capitol succeeding the attack. Walking through Statutory Hall, the place within the Capitol building that hosts a number of historical statues and paintings, Cheney observed riot police lining the walls, in addition to the normal statues. One in particular stood out to Cheney, on a day when she felt many politicians were neglecting their duty.

“It’s a statue of Cleo. She’s the muse of history, and she was placed there when the House of Representatives met in that room, to remind members of the house that their deeds are being recorded in the book of history,” Cheney said. “She was put there to remind everyone that what we do matters.”

Cheney condemned election denial efforts from Republicans, including the former president, and directed listeners to watch any previous concession speech, a clear reference to president Trump’s lack of an official concession. Before ending her speech and the rally, Cheney called on voters and attendees, including Republicans, independents, and Democrats, to take a stand.

“As a country today, we are facing an ongoing assault by the former president and by the people that are spreading his lie, a lie we know causes violence. And the chips are down for us. This is our time to be tested. Not a single one of us in this room, and not a single one of us across this country can be a bystander,” Cheney said. “We all must stand and defend this republic.”

Polls Open on Election Day
Leave a Comment
About the Contributor

Adan Quan is a member of the Class of 2023 and one of the Editors-in-Chief of  for Portrait. This is his third year on staff as a senior. Adan’s favorite...